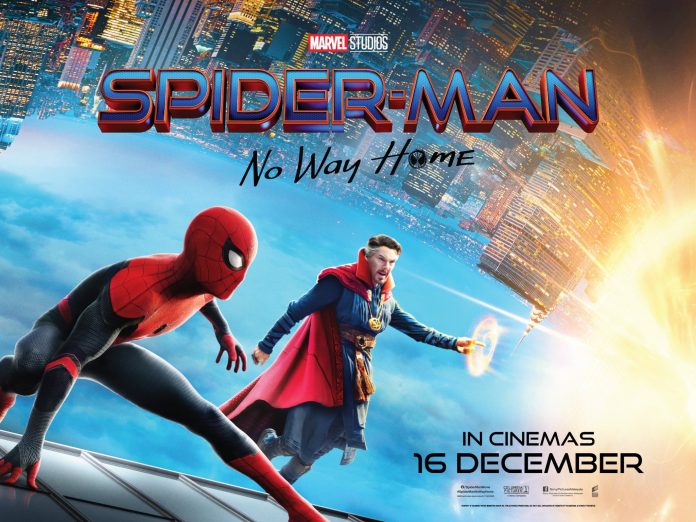 Yes, Marvel and Sony are going to keep going together as partners.

Oh. Oh, the movie is… so ambitious and the movie has everything that people have come to expect from a Spider-Man movie. All the spectacle, all the heart, but at the same time, as expansive as it is, it’s always a very intimate story that is about Peter Parker… and his heart.

Amy Pascal: Well, here’s what I would say. I would say that it’s the culmination of the Homecoming trilogy, of the story of Tom Holland becoming the Spider-Man that we’ve all been waiting for him to be. It certainly tells that story and it does… and as you know from seeing the trailers, it does bring some of the characters from the early movies together. And yes, wrapping a bow around it sounds nice.

Oh, I couldn’t possibly say that. I’m just thrilled that everybody is going to be able to see these magnificent actors reprise these roles, which they were so brilliant at. And which they do this time, and I think it’s going to be really special.

I think each of the actors brought their own kind of humanity to the character. All of them are brilliant and Tom is singular. I think that he’s embodied everything about Peter Parker that everybody was looking for. He’s funny and charming and… a fantastic athlete and a wonderful actor, and he has such humanity.

Boy, you could probably answer that question. You know. Yes, we’ve been… we don’t want to spoil things for people, you know? That’s one of the problems with movies is that people know everything before they walk into the theater. So we’ve been trying to make sure people get the full theatrical experience when they go to the movie. And yeah, you try to never confirm anything in any movie, but this one is a big one.

[Laughs] Rare spider. Spider-Man is always very special and different from everything else, but I think the beautiful thing is you had two big corporations that decided to work together for the good of the story and the character, and I don’t think that’s always the spirit that you see. Yeah, working together and helping each other make things be better is a good model.

Well, I certainly hope so. The audience and the world will be the judge of that. Kevin [Feige] and I are very proud of this movie.

Yeah, it was… when I approached Chris and Phil about doing the Spider-Verse movies when I was still running Sony, I said, “Can you guys figure out how to do an animated Spider-Man movie?” And the first thing they said to me was, “Absolutely, if we do Spider-Verse and we do Miles.” And I’m like, “Right on.” Because of course, it is in the comics, but nobody could have done it better than them.

It’s going to be fantastic. We have something to show on that very soon.

I would say there’s so many things that we’re going to be able to explore, but what we always have to do before we decide who the villain is going to be and what Spidey goes up against is what is the story we’re telling about? You know? What’s the Peter Parker story we’re telling? What’s the Miles Morales story that we’re telling? But we always have to start with that. The good thing about these movies is as big as the canvas they take place on can be, they are always just stories about a kid.

We all want to keep making movies together. How’s that for an answer?