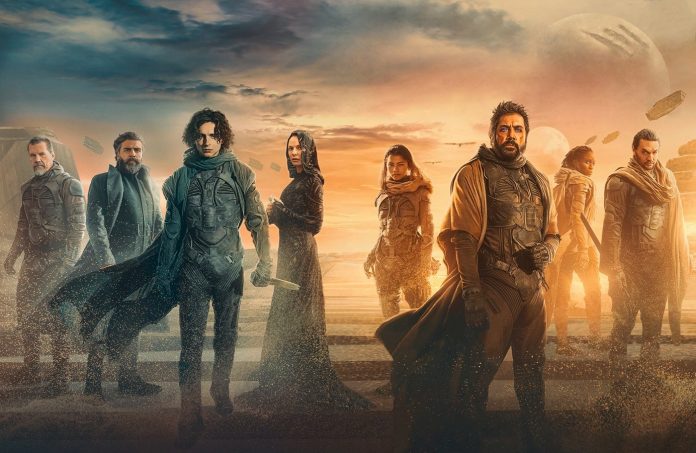 “The way it happened, I’m still not happy. Frankly, to watch ‘Dune’ on a television, the best way I can compare it is to drive a speedboat in your bathtub, for me, it’s ridiculous. It’s a movie that has been made as a tribute to the big-screen experience.”

DUNE Part One is remarkable, stunning, immersive & a truly masterful cinematic achievement. Villeneuve simultaneously created one of the most intimate yet large scale productions I've ever seen. Zimmer's score is an absolute all-timer. Pure cinematic bliss on every single level. pic.twitter.com/UFoEGRE4kI

I’ve watched #Dune & it’s among the most immersive moviegoing experiences I’ve ever had w/ a sci-fi film. There is masterful filmmaking on display here. When paired w/ its big, monstrous sound, the film wondrously transports you to a new, exciting, horrific yet beautiful world pic.twitter.com/Z0oNUJbiNE

I have experienced #Dune. It's a once-in-a-generation film, akin to when Lord of the Rings hit the big screen 20 years ago. When it ended I was ready for more

I left DUNE shaking. This is how people seeing 2001: A SPACE ODYSSEY back in 1968 for the first time must have felt. The grandeur of this thing is off the charts. However blown away you think you’re going to be, multiply it by ten. #Venezia78

.@dunemovie is spectacular. Denis Villeneuve has crafted a visual masterpiece. Greig Fraser’s cinematography is a sight to be seen,simply gorgeous. You can’t take your eyes off the screen. Timothée Chalamet is outstanding. Don't be surprised by a crafts sweep pic.twitter.com/MDUAWDs3GF

'Dune' is 'Game Thrones' meets 'Star Wars' (the originals). Thoroughly enjoyed it. Visually stunning and more esoteric (in a good way) than most sci-fi blockbusters. It demands to be seen on the big screen. #Dune #Venezia78 pic.twitter.com/49I5je5Bsb

#Dune is the spectacle it promises to be.

Some sequences move very slowly. Some move quickly and are tremendously engaging.

I know you’re used to people raving about a movie on social media after it premieres. But trust me when I say Denis Villeneuve's #Dune is a masterpiece not just of science-fiction but of cinema. Haven’t felt transported like that in a movie theater in a long time. 1/3 pic.twitter.com/VvJ5xg8zlb

Dune – !!!! Wow wow wow. Blown away. This is everything I was hoping for. Launching us into a whole new era of spectacular sci-fi taking us to Arrakis & beyond. An exhilarating big screen, pulse pounding, awe-inspiring experience. This is what we go to the movies for. #Venezia78 pic.twitter.com/DoEJTEolBz

DUNE delivers the impossible — an adaptation of Herbert’s novel that understands the themes, the scope and the vision of the source material.

Denis Villeneuve has delivered a pitch perfect epic that DEMANDS Part 2, Zimmer continues to reinvent himself and its visually GORGEOUS. pic.twitter.com/Vbn4lOuf20

#Dune is unlike most of Denis Villeneuve’s other films, in that it’s heavily action-focused. Despite this, it’s very entertaining and definitely calls for a sequel. Chalamet is great, but it’s Ferguson who shines brightest. It’s certainly a film that audiences will remember. pic.twitter.com/yVafZeWN8h

#Dune is a visual spectacle. A new world is born for people like me, with no knowledge of the source material, and an achievement by Denis Villeneuve. Suspect Oscar noms in every tech category, director, picture. It opens with title card DUNE PART ONE. We better get PART TWO. pic.twitter.com/SkwjJCTlBo

Here's my review of #Dune, what may very well be the next big franchise. I truly loved this movie, its epic scope, it's visuals and its interrogation of the messianic archetype. It may be long, but it flies by. https://t.co/56icryLrGC

The @DuneMovie Sketchbook has arrived. 🌘 Listen to the extended, immersive musical explorations from the #DuneMovie score and get a taste of what's in store at https://t.co/DKaOAJAvFB now. pic.twitter.com/wkXWvBU2yh