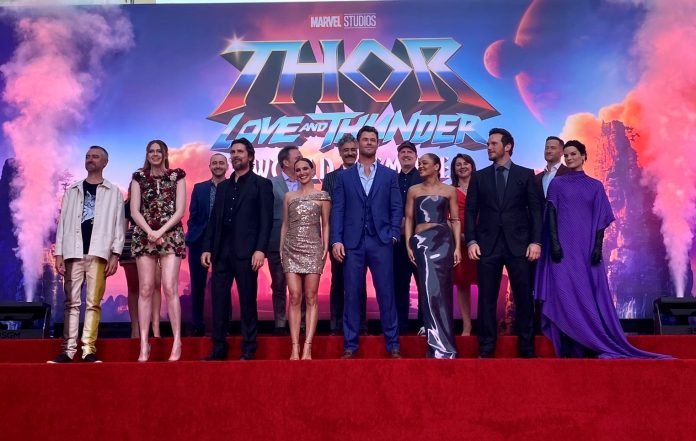 #ThorLoveAndThunder might be my favorite Marvel movie and it also might be their very best. A sublime mixture of extreme silliness, dreamy surrealism and genuine emotion, with some of the most visually inventive set pieces in the MCU. Full of delightful surprises. Just great.⚡️ pic.twitter.com/7Dvku7F9yF

#ThorLoveAndThunder is predictably hilarious yet unexpectedly personal and heartfelt. Christian Bale and Natalie Portman's performances truly shine while Waititi delivers an emotional story. I think this may be my favorite Thor movie. pic.twitter.com/i7BpmQHvQ1

holy shit. #ThorLoveandThunder  is the perfect blend of taika at his best with comedy and a punch to the gut all in one. i left this movie emotionally satisfied while also sobbing and just perfection. we stan a dad rock soundtrack. in the words of my new favorite characters: AHH pic.twitter.com/MytduVq89h

If you’re looking Thor a good time, Waititi delivers what audiences want (and need) with heart and humor. #ThorLoveAndThunder benefits from a restrained runtime and every significant character feels nicely balanced. It’s a very satisfying ride. The trailers don’t do it justice.

I had a blast with #ThorLoveAndThunder! You could tell they gave Taika Watiti full creative control, which pays off in many ways. This is definitely one of the funnier Marvel films. Visually it is also one of the best-looking MCU films we’ve gotten recently. pic.twitter.com/P0vvfuov1n

#ThorLoveAndThunder is everything great about comic book movies! Truly hilarious insanity, heart wrenching tragedy, and bombastic action! Visually stunning and one of the best MCU soundtracks. The entire cast is fantastic, but Christian Bale and Natalie Portman are phenomenal! pic.twitter.com/dVkpf54fmP

This film as a LOT of exposition. It’s a dialogue heavy film with a lot of explaining going on throughout. Sometimes it works and sometimes it feels like it’s dragging. Your mileage will definitely vary. #Marvel #Thor #ThorLoveAndThunder pic.twitter.com/KsBbCPXszL

Chris Hemsworth is having SO MUCH FUN and it’s so great to see that his passion for #Thor is still there after all these years. You can’t help but smile when watching him. #Marvel #Thor #ThorLoveAndThunder pic.twitter.com/rxz26Y2Zjy

Oh and genuinely two of the most exciting post credits scenes I’ve seen from the MCU in a LONG while. Awesome stuff. #ThorLoveAndThunder https://t.co/6ZdKUMZARS

But the beating heart of this film is #Thor & #JaneFoster. I mean my god, the romance was so real, so relatable, I felt every moment of it, the passion. Might be my 2nd fav MCU romance bc of how genuine it was & the actors deliver their best performances as these heroes. pic.twitter.com/5uEIYbMDXk

#ThorLoveAndThunder is a brisk cosmic adventure that wears its heart on its sleeve & is an absolute BLAST at the theaters. It perfectly blends humor & heart, thrills, stakes, it’s got everything you could ever want from a Marvel movie! ⚡️❤️ pic.twitter.com/SVTqCa3A3x

#ThorLoveAndThunder is absolutely electrifying. My favorite #Thor movie of the four.

Taika Waititi through and through. It’s mature, the soundtrack rocks, and there’s great surprises. So much fun.

Feels like the best of MCU Phase 1 and Phase 4 in one entry. Loved it. pic.twitter.com/3SO5yoy6j0

Natalie Portman as Jane Foster, aka #MightyThor, is just such a home run. Her whole story here is powerful and fulfilling.

Also, these two are the absolute best in this film. Give us a spin-off with just the adventures of Valkyrie and Mighty Thor! #ThorLoveAndThunder pic.twitter.com/0bRtGBhTge

There are lots of fun little details in #ThorLoverAndThunder, so keep your eyes open. It's more emotional than #ThorRagnarok, but both films have a really great sense of humor & the best side characters (the goats!). Also, the post-credits stuff is major so don't go anywhere. pic.twitter.com/tcUGSlV2kh

Despite having issues with its inconsistent tone and the humor being hit or miss, I do think that #ThorLoveandThunder is the best of the four standalone Thor films. I do wish Tessa was in it more but the 80s soundtrack was great touch. Overall, it’s a very fun summer blockbuster.