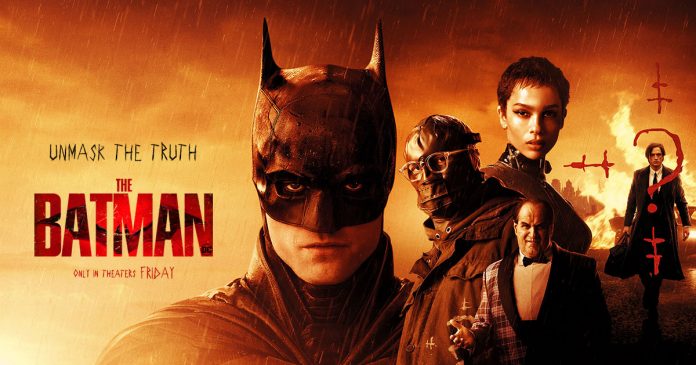 #TheBatman will go down as one of the best comicbook films in a long time. The script, performances, set pieces, & visual storytelling was phenomenal. Robert Pattinson shines as an emotional brooding Batman next to Paul Dano's terrifying Riddler. Matt Reeves' modern masterpiece. pic.twitter.com/FBoQmjLzJs

#TheBatman is the BEST BATMAN MOVIE EVER. @MattReevesLA has created an intelligent Dark Knight story. The grounded tone with the dark interior create the most memorable Gotham City ever. Dano is terrifying, Kravitz is mesmerizing and Pattinson IS The Batman. @WarnerBrosCA pic.twitter.com/AaBDG16qBy

Paul Dano is absolutely terrifying as The Riddler in #TheBatman.
He easily makes his way into the Top 3 all-time #Batman movie villains –@fenixdy pic.twitter.com/s16fuy0U2m

Had the honor of watching #TheBatman today. DC was never as thrilling and fun and deep as this film, that has one of the action scenes of the entire franchise. Zoë Kravitz might be the MVP. Her performance would give her an Oscar, if the Academy was less conservative.👇 pic.twitter.com/09itSS9yBt

The Batman is unlike any other Batman film before it. The plot is grounded in reality, even more so than Nolan’s Dark Knight trilogy. #TheBatman is more of a detective story rather than a superhero film. The cast is v. good with Colin Ferrell & Paul Dano being the film’s MVPs. pic.twitter.com/quMsytlbt6

WOW. #TheBatman is the BEST crafted Batman film of ALL TIME. Robert Pattinson is PERFECT for the role & Matt Reeves’ direction shines with all departments firing on all cylinders. A masterful technical achievement that becomes one of the greatest comic book movies of all time pic.twitter.com/ROIOCKExkQ

Matt Reeves has made THE definitive BATMAN film with THE BATMAN. Think of Se7en but set in Gotham. Robert Pattinson’s eyes are so intense & observant under the black cowl while Michael Giacchino’s score is a grand & haunting masterwork. An epic, dark & thematically rich neo-noir. pic.twitter.com/wAFexaPYEF

Matt Reeves #TheBatman FINALLY gives us the most comic accurate portrayal of the DARK KNIGHT DETECTIVE in film. The movie to me is an homage to the great Batman writers like Denny O'Neil, Frank Miller, and Jeph Loeb. Pattinson did the homework and delivered. #TheBatmanMovie pic.twitter.com/rLCzPG5OYK

Paul Dano is extremely good and genuinely terrifying as the Riddler. I also loved Collin Farrell's version of the Penguin and he delivered some laughs I was not expecting. #TheBatman pic.twitter.com/I8srpWggSO

#TheBatman is a visceral, good movie.

#TheBatman starts out intensely, letting you know it’s pushing as close to an R-rating that it can while maintaining a PG-13.

Matt Reeves sets the tone early to say this one is gonna be gritty, intense, and sometimes scary with true horror elements injected – which is cool. pic.twitter.com/fQg9J16hpV

This movie deserves an Oscar nomination in technical aspects, it's crazy how visually good each scene looks and the soundtrack is wonderful, This is the best Matt Reeves movie And you can see the love he has for the character. pic.twitter.com/nKLAEdBBmH

You've nothing to worry about 😳 #TheBatman is gripping! A haunting, detective thriller that'll have you on the edge of your seat enthralling in the tension, characters & action sequences. It's one of Comic Book Movies best & shows why Matt Reeves is one of the best working today pic.twitter.com/7Q72YLziDQ

I've never seen a movie like this being too complex, it's 3 hours of pure batman playing detective, Gotham feels so alive and very intimate.

Matt Reeves is a genius and this movie is an Oscar candidate and could win if he puts his mind to it. pic.twitter.com/bxdfeAYaUC

#TheBatman is an engrossing crime thriller with grounded characters and pitch-perfect performances by the entire crew. Its lengthy runtime is filled with methodical storytelling that mixes several iterations of the source material. Action is great, but not the focus. pic.twitter.com/3aTgxGcC8q

#TheBatman is a ridiculous, bold, brilliant event, absolutely jam-packed with style & a surprising sense of humor. It’s like nothing else in this space, and that has only made me love it more with each passing moment. I’m obsessed. pic.twitter.com/TPdCSeX5JT

#TheBatman is a triumphant Masterpiece. The perfect Batman film in every way

It’s gritty and dark but heroic. It’s the best we’ve ever seen Batman on film pic.twitter.com/owwS9nK5tm

#TheBatman is a stunning, glorious crime epic. One of my notes was literally "I can't believe the studio let a movie like *this* happen." It’s like ‘Seven’/‘Zodiac’ but with #Batman.

#TheBatman IS EVERYTHING YOU DREAMED A BATMAN FILM WOULD BE! Matt Reeves crafts a brilliant & immersive Gotham I didn’t want to leave.Pattinson as Batman sets a new standard for the caped crusader. Dano’s Riddler is TERRIFYING! Music,Visuals, Cast all just create a 10/10 BAT-FILM pic.twitter.com/ju0FNKjo4I

#TheBatman is a dark crime noir that floors you from start to finish. This isn’t just one of the most Unique comic book movies to date…. It is easily the BEST Batman Adaptation YET & Yes Robert Pattinson is everything the trailers have promised you & more. He is INCREDIBLE pic.twitter.com/GgeSTqS7B9

#TheBatman is brilliant! A dark, gritty, crime thriller that is pulled straight out of a graphic novel. @MattReevesLA has directed the greatest Batman yet and Pattinson was born to play vengeance incarnate. Bravo. @WarnerBrosCA pic.twitter.com/yU0GHhFSca

My initial thoughts after watching #TheBatman. I already want to see it again. Everyone in this film is perfection. They really do push that PG-13 rating. So many tense moments. It was everything I wanted. Robert Pattinson IS Batman. pic.twitter.com/AaO7Xsbod5

#TheBatman is an ALL TIME BEST FILM. @MattReevesLA has crafted the DEFINITIVE take on The Caped Crusader that Pattinson will define for generations to come. Brooding and brutal. I didn’t want it to end. This is the movie we’ve been waiting for and changes the game. @WarnerBrosCA pic.twitter.com/0uOAEDe3Sa